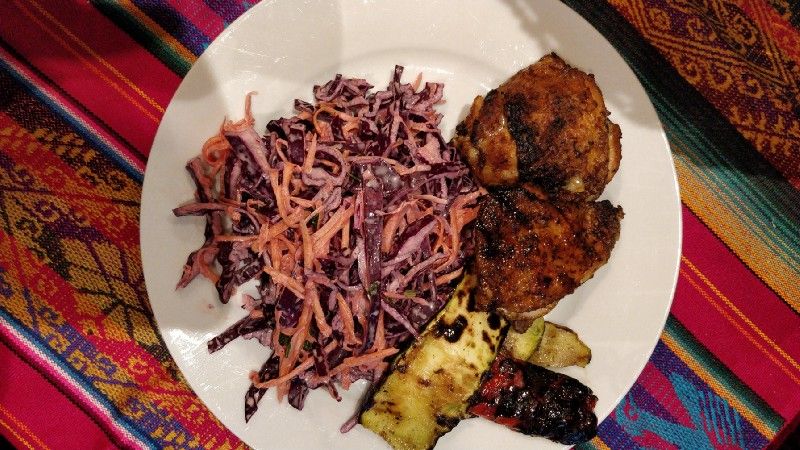 I’m starting to hallucinate items in the fridge — that, or Bear is eating them faster than I can prepare them how I’d planned.

My coleslaw idea was based around the last spring onion I could swear was in the fridge when I performed the scan at breakfast time, yet when the time comes, what I find is half a leek, along with many other vegetable halves Bear can’t bring himself to fully finish, as the responsibility of being the finisher only fully appears when the item no longer exists!

We season chicken in anticipation of bbqing in the evening and prepare for another day of lockdown.

We’ve called EV to catch up and to make tentative when will we see each other again plans… Luckily the call also begets us two sacks of chaux and cement we desperately need to finish our footpath.

The day is spent mostly on my Smartphone discussing Tiger King with people all over the globe. I spend almost as many hours as I did watching the doc, breaking it apart and marvelling at each horrific morsel the programme presented while skipping over the terrible plight of those poor animals. We ––myself included –– were far too busy ogling the specimens outside the cages.

We fill in our permission forms and I’m surprised that it’s the first time we’ve ticked the exercise box. I’ve already got Michelle Obama arms from hoisting paving stones in the garden.

We stroll over the bridge and only encounter one neighbour, also taking a walk at the same time as us so we catch up at a safe distance. She’s quarantined alone, and won’t see her children for two months. I momentarily realise how lucky we are, to have each other to laugh with and to shout at, when faced with the alternative of hunkering down by oneself for days seemingly without end.

It’s Bears turn to water the garden, and I look forward to the day, hopefully soon, when we look out of the window and see the lawn returned to its full glory. Right now I’m in a daily war with the birds raiding our grass seeds like they’re at a TGI Fridays salad buffet.

My reproach from the window in the morning is half hearted and even they know it.

When the coals are hot, Bear throws on some courgettes and red peppers, before addressing the chicken thighs seasoned with paprika, garlic and chilli. He adds potatoes for himself as grilling potatoes over fire gives him great pleasure. They are nice, but they’re still potatoes, so I fill my belly with the red cabbage and carrot slaw, topped with what remains of our chives and some coriander.