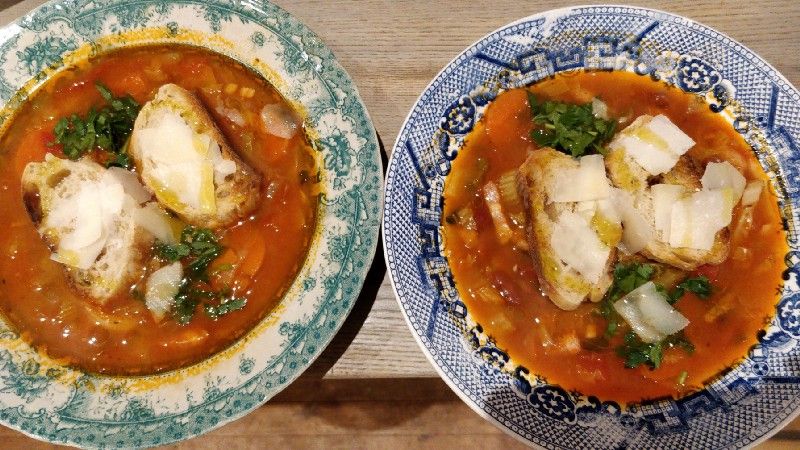 I watched a video forwarded from a friend that put me to shame. I’d been patting myself on the back for what I’d considered as stockpiling (buying two packets of prosciutto — — thereby begetting 12 slices instead of 6, it’s a fiesta) until I saw the middle eastern family that had turned their house into an Asda (or whatever store the food came from) nexus, and that had apparently no plans of leaving their house until Archie ascends to his rightful place on the British throne in the coup of 2041 when mankind has learned to live on dill and tree bark.

I’d only recently learned the art of buying in doubles — having cried on one too many occasions upon finding a pair of H&M jeans discontinued that skim my thighs but don’t require me to strap a melon against my stomach for them to fit perfectly. Buying in two still feels extravagant, but I can do it.

Bear and I have failed time and again to buy in bulk food-wise, yet we somehow have five bottles of bleach in the house, and none of those were purchased during the panic. Why do we hurt ourselves this way? I wonder if warmed up dirt and fire-ash can be substituted for coffee? Thankfully there are some sweet onions, once I get a craving for an apple.

We went our separate ways for lunch with Bear scooping the smear of massamam sauce that remained into a warmed baguette. I opted for my go-to in times of quick lunch making: pasta.

I chose something I hadn’t eaten in a while: castellane (ridged shells) with broccoli. Fast, uncomplicated, rendered holy via the addition of anchovy to the oil and — do I even need to mention at this point? — chilli.

For dinner I decided to make a Tuscan bean stew. Tuscan because it reminded me of the name on a can of Tesco’s soup I once discovered by accident that was actually pretty delicious once you added your own flourishes to it, like lardons fried in garlic. Tuscan as there weren’t enough of the other ingredients that would have transformed it into a ribollita. Tuscan just because…

We’d bought a pre chopped container of stew mix from the supermarket containing cranberry beans, celery, carrots, and cabbage, which in a very simple manner via sweating onions, garlic, and adding lardons (for flavour), we then added the veggies, more beans (borlotti, pinto, and black eyed), some stock and a couple of plum tomatoes, we let cook down for over an hour.

It was twenty degrees in the day but by nightfall, the temperature dropped enough to warrant the fire, and for a bowl of soup to feel apropos… All we lacked was the sage and lavender Tuscany light.

But these are war times… the soup would have to be enough.