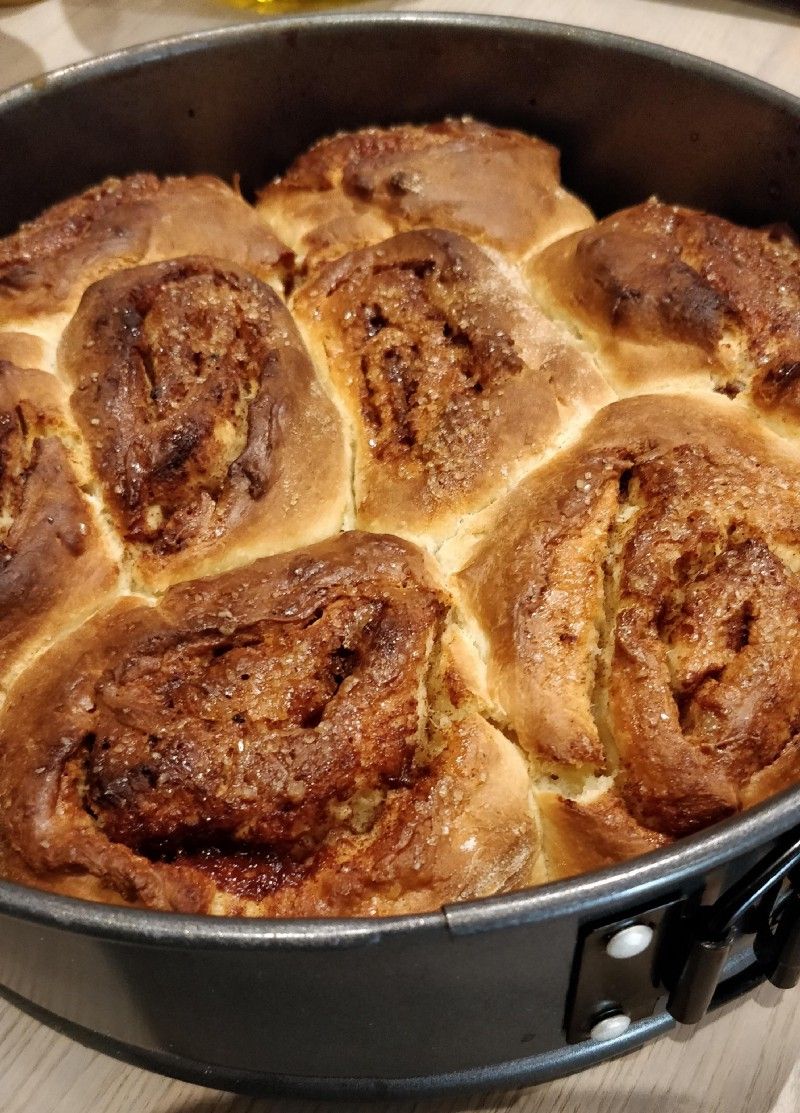 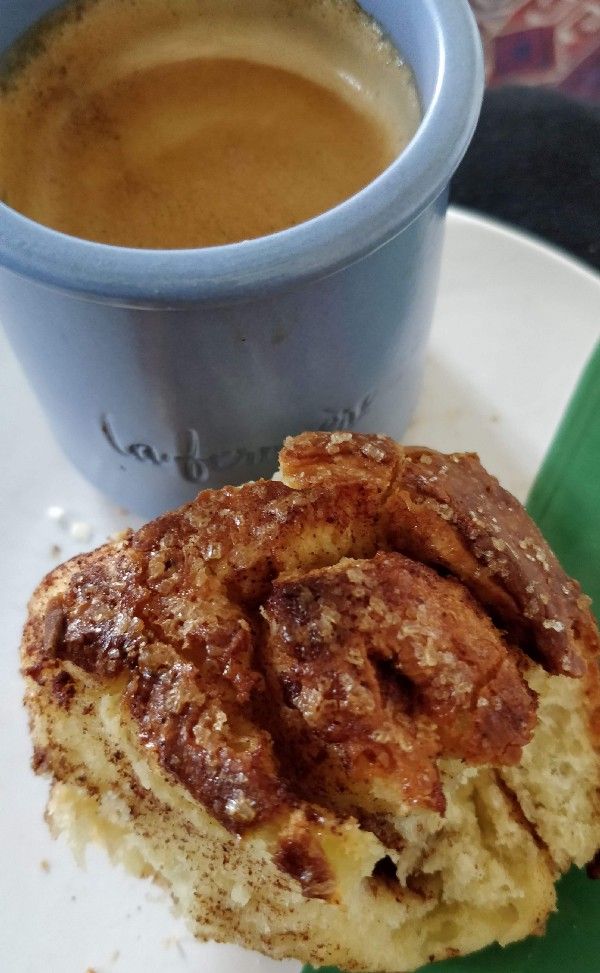 Watching videos on how to make cinnamon rolls has now taken over the space in my life I reserved for Tiger King.

I can actually feel my cells engorging themselves as I devour clip after clip on YouTube as I work myself up to taking the plunge... I don’t even know where this craving for a cinnamon bun has appeared from. It’s not something I often eat, yet it has occupied far too much of my present attention. I mean I’m in France, for goodness sake! Every third store is a patisserie here, much like stumbling across a Boots chemist in London every fourteen steps.

Both trips to the doctor and the supermarket fail as the doctor is closed and the landline number has been scratched off the poster on the clinic. I’m guessing that calls have been spiking since the crisis and even he too needs to rest.

The supermarket is pretty much stocked but has no chicken livers, and no yeast, the items we’d gone in for, so I go home, resigned to continue cruising the internet in search of my fix.

I make a valiant start on my herb garden, planting basil, coriander and parsley behind the gargantuan rosemary bushes in the garden. (They’ll be the encouragement these fledgling newbies need.) I also reappropriate the oregano I’d planted at the front of the house last year and add this to the new herb location along with a tiny bit of mint. Let’s see what takes…

Upstairs, I search our baking box and am stunned to discover that we do in fact have yeast and so I take the plunge and start to assemble my ingredients.

I decided to go with Felicity Cloake’s recipe as she’s a woman after my own heart. I’m practically full after reading most of her recipes, but this is the first one I’ve ever attempted. It’s a travesty.

It also took me far too long to acknowledge that what I actually wanted is a cinnamon roll as opposed to a cinnabun — delightful as those are. But I figure that once I start making cinnabuns (complete with their cream cheese topping) it’s all over for me… When the government declares we can leave our homes for good, I won’t be able to, as my arse will be firmly embedded into the sofa.

A Scandinavian cinnamon roll offers an iota more of restraint. It might be what saves me from going over the edge entirely.

The recipe seems pretty easy, I must say, and from the moment I grind the cardamom seeds and the fragrance wafts up into the atmosphere I’m committed. These are thrown into warm milk that’s brought up to boiling point before it’s turned off and the butter is added before waiting for the mixture to lose some of its heat.

Dry ingredients (flour, sugar, salt, yeast) are added into a bowl and a well made to deposit a beaten egg that is mixed through before the spiced milk is added.

Once this is mixed through and comes away from the edge of the bowl, I spoon it onto my lightly greased work surface as instructed. Felicity’s recipe had included the caveat that the mixture becomes ‘very soft’, which I’d eyeballed and dismissed in three seconds flat, however, as soon the mixture meets my countertop I have a change of heart.

Having dumped the pale yellow ectoplasm onto the surface I get to work kneading… Mere moments in, I’m mentally penning an apology note for Bear as there’s no way this counter is going to be salvageable. I fleetingly consider burning the kitchen down to hide my crimes except there’s no way to escape as I’ve apparently affected a citizen’s arrest on myself because I’m now firmly glued to the worktop!

Don’t ask me how, but I successfully manage to free a thumb — Ethan Hunt in Mission Impossible style — which allows me access to read the recipe on my phone again after my phone screen had faded to black. I have no confidence this five minute kneading process is changing anything but I scoop (or smear) the dough into a lightly oiled bowl, cover with clingfilm and leave to rise for thirty minutes in a cool oven over a bowl of boiling water while I set to work on the filling.

This is the point at which I discover I have no dark brown sugar.

I have memories of dark brown sugar, but they must have been in a dream sequence as a kitchen ransack later, no such item is located. I make a frantic call to Bear who makes an emergency dash to the shop (there’s no point in making cinnamon rolls if they don’t have dark innards), but even he comes up empty at two shops.

This has nothing, I’m sure, to do with the quarantine.

We’re simply not in a part of the world that really uses dark sugar. There’s an abundance of light brown in all different textures and so that’ll have to do as I haven’t come this far for nothing.

Light brown sugar, butter, and cinnamon are beaten together to make filling. When it’s easily spreadable, I give my arms a rest.

Retrieving the dough; it’s risen but not exponentially. I roll it out into a rectangle on a floured surface and smear on the cinnamon paste with my fingers. I then attempt to swiss-roll it up, which in the videos looked seamless but in my case involves outright begging the dough to peel itself off my countertop.

Once this is done I cut it into eight slices which I place in a greaseproof tin before covering again and leaving to prove (i.e. until the dough springs back easily when prodded gently. This takes about forty five minutes and is ironically the point where my craving for cinnamon rolls leaves me.

I turned against the recipe, which I only realise late in the game, includes a finish but no instructions on how to apply it.

I’ve long held a belief that recipe makers (or posters onto sites/newspaper typesetters) must be oath-bound to print recipes with one error slash oversight included so that novice cooks are incapable of wholly succeeding in their attempts to replicate things... Don’t they say that every Persian carpet has a little mistake sewn in, because nothing is perfect but God?

I glaze the rolls with milk but an egg would be better for this purpose, I imagine. I just don’t want to waste an egg, which is silly but true, so I go with milk and a sprinkle of brown sugar. The rolls are then popped into the oven for 25 minutes at 200c.

This might be the moment to point out again that both Bear and I are lactose intolerant…and are locked down in a house together. It’s the most milk we’ll have consumed in our time together, but he hasn’t seen what goes into the rolls.

Nevertheless, I imagine, when he’s at one end of the house cursing my name after polishing off two mega-buns in the time it takes to eat two grapes, I’ll be clutching my stomach somewhere dark and far away, mumbling ‘still worth it!’ defiantly to the end.