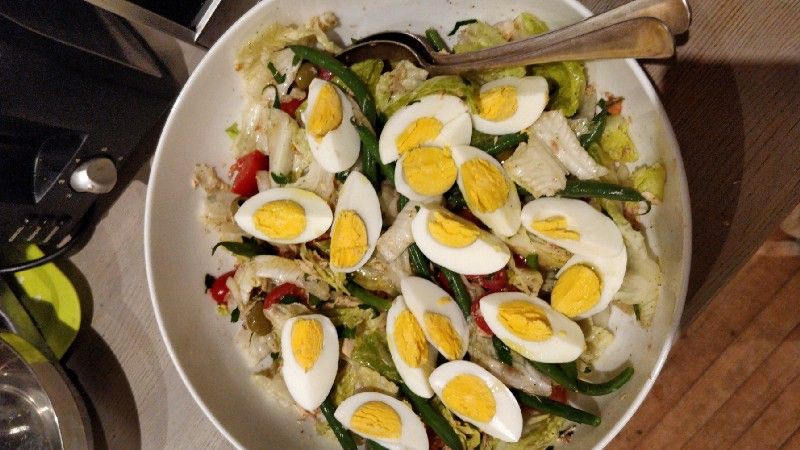 I woke up, which means I actually went to sleep, unlike night of Day Seven when my brain decided to throw a firework party featuring Blue Man Group without asking for permission. I vault out of bed like a Disney princess at 7.24am to play with Riley before my 8.00am date in the garden.

When the words Look Up pop inside my head in the kitchen, I do, and spot the yellow and golden halo of a Twinnings Everyday box of tea and genuinely whoop with delight! I thought I’d run out of tea and had grudgingly accepted a dreary lockdown life with no hope of a trip to London to replenish my stores… But the Hoarder Gods have indeed smiled down upon me. Hurrah.

We finally decide to face our fears and finish the garden as the only real excuse to be outside is working on our soil. It’s our exercise, it’s where Riley ‘loos’ (at least if a policeman asks me why I’ve been out in my garden longer than an hour, it is) and it’s also a meeting room. We’re only infecting ourselves.

Bear has helpfully bought the last two bags of cement from the hardware shop before Lockdown Phase 2: A Deeper Dive is activated. If the original lockdown clipped our wings then Phase 2 ripped them off completely our backs as new rules means we’re unable to venture more than a kilometre away from home. I’m grateful once again that we’re in a village which has amenities. Many of the small enclaves dotted around rural France have nothing at all. That’s nothing literally, and not in that gauche London way which means at least one of every high street supermarket, a Cafe Nero, a Chicken Inn/Village/King/Den and a handful of immigrant delis…

By nothing, I mean bupkis.

I blew my wad early in this ‘gardening game’ due to some overzealous bamboo extraction which led to me messing up both my knees. I’ve taken to walking around the house like a TV zombie. I’ve developed a signature move to get out of bed in the morning that resembles a fish trying to escape a boat bottom.

After a mini digger had ridden its way through our house in late February (that was quicker than figuring out how to get it down the five steps to the garden) Jean Pierre, (insert stock image of a French farmer who we’d assigned the job to) had pulled up the entire garden to remove the bamboo that had been planted without a barrier and had gone Spring Break-wild. Before we started, we were sold the idea that this garden makeover would be so simple, monkeys could do it… Having been unable to source said monkeys to complete the job, we’ve been forced to muster up our best selves and get on with it.

At the time I’d felt like Queen Arthur as I’d pulled yards of bamboo root from the soil. In hindsight I was probably less Wonder Woman (Gal Gadot version) and more woman wandering aimlessly in loosening head-wrap to the bemusement of Jean Pierre watching from his height advantage on the digger.

We make a massive push forward with our stone breaking and hours later I’m shocked to discover our garden is in fact looking like a garden. There’s much more to do, but I’m impressed with our effort. We’ll attempt to lay down a concrete paving stone path tomorrow.

I exit like a stiff robot while Bear attacks the three tonnes of pebbles chucked down the garden steps when we were younger and more naive and the world had barely heard the word Covid. When the bags local building merchants had delivered them in wouldn’t fit through the door, they came up with the pebble-hill workaround. If only we had visiting children, we’d be the coolest adults ever. Their play might also help redistribute the stones. Help to flatten our curve.

Our lunch reward is a huge tuna salad with boiled eggs, green olives and sweet onions. We’ve run out of bread, which would take it over the top, but that’s okay.