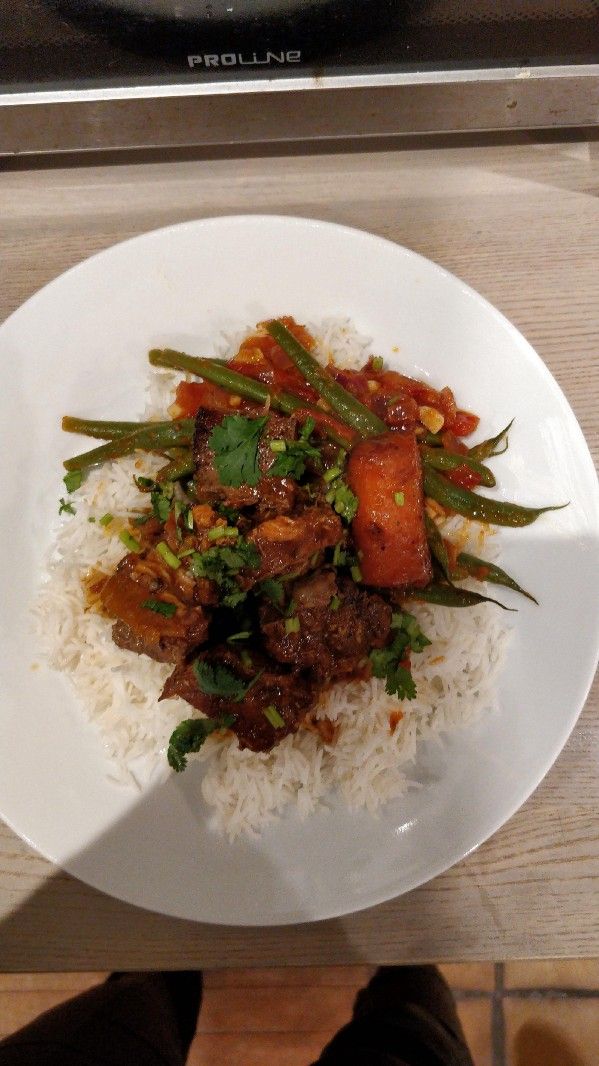 Either I require much more drama in my daily life than I previously recognised or I’m subconsciously challenging myself to see what I’ll succumb to, if absolutely necessary. In short, turns out I will eat burnt bread when the toaster — usually set to 2.5 for a light Greece in early May tan — — turns the last few slices on a two day old baguette into brittle coal crisps… Apparently when push comes to shove, I will happily shovel down my throat with salty butter and apricot jam to hide the taste and my shame. That means Purina pot pie will surely be a go, should it come to it.

Peace: I didn’t expect to meet you so early in the game, yet here you are…

Today is Bear’s turn at the wheel while I sit back and soak up the emerging sun. He’s making beef ribs for lunch, cooked with patience in a pressure cooker. It’s a good cut, not simply because it’s tasty, but because it’s under-appreciated here for some reason, hence superbly cheap. Onions, red peppers, carrots for a little sweetness and a ton of spices. I’ll make the rice (in a rice cooker); the last of the Thai we have, and perhaps some green beans before they go off.

The title for this writing drew inspiration from my current favourite comedian, Halle Berry’s oeuvre. For people that might not consider Halle to possess comedy chops, let’s speak again after you’ve sat through The Call and Kidnapped… Things We Lost In In The Fire — was, i believe, a poignant movie about loss, reflection and forgiveness. It’s an arrangement of wording that’s stayed with me (even if the film itself hasn’t), and a reminder to draw appreciation of life, wherever possible, during a difficult time.

It’s Mother’s Day in the UK which for me was about receiving a daffodil in mass to give to our mothers when we saw them later on in the day, which we always did as if they didn’t remind us of the obligation then Sainsbury’s did via their huge window and shop front displays… Precious time was always lost searching for the kind of card my mother likes, the ones with a four page poem written inside, that barely exist anymore. Slowly my store bought sentiments have become shorter, conveying what I hope isn’t being interpreted as my ambivalence.

It’s hard to think of her alone this Sunday, when usually her house would be pregnant with the voices of family and visitors, the air heavy with the aroma of fried fish and jollof rice she’d be making from early morning, in anticipation of holding court. We plan a conciliatory Group FaceTime in its place, which isn’t the same but has its upsides. There’s no strong-arming into hoovering her house that can be done at distance.

We received a message that had been doing the rounds on Facebook telling us to place a lit candle in our windows on Wednesday at 7.30pm to demonstrate our solidarity in the crisis. I can’t imagine anything like that happening in London, mostly because a candle in the window signifies a home presence and thereby possible availability of toilet roll for the pilfering. I’m with you in darkness — thank you very much.

The garden is quiet enough to hear two pigeons arguing in a silver birch tree across the river. They are literally having a flap, as I watch them trash each other with their wings angrily until one gives in.

Sunday’s are typically lazy here but even this, this utter lack of sighting one other person feels so alien, I’m grateful to know I’m only metres from Bear and Riley. The voice in my head is too loud, even for me, quite content most of the time in my own company. An hour passes before I hear a sound denoting the presence of another human. The whizz of a hedge trimmer in a next door neighbour’s garden. We’re separated by a stone wall and a little rivulet but as the smell of their shorn grass wafts over me, we’re as close as can be.