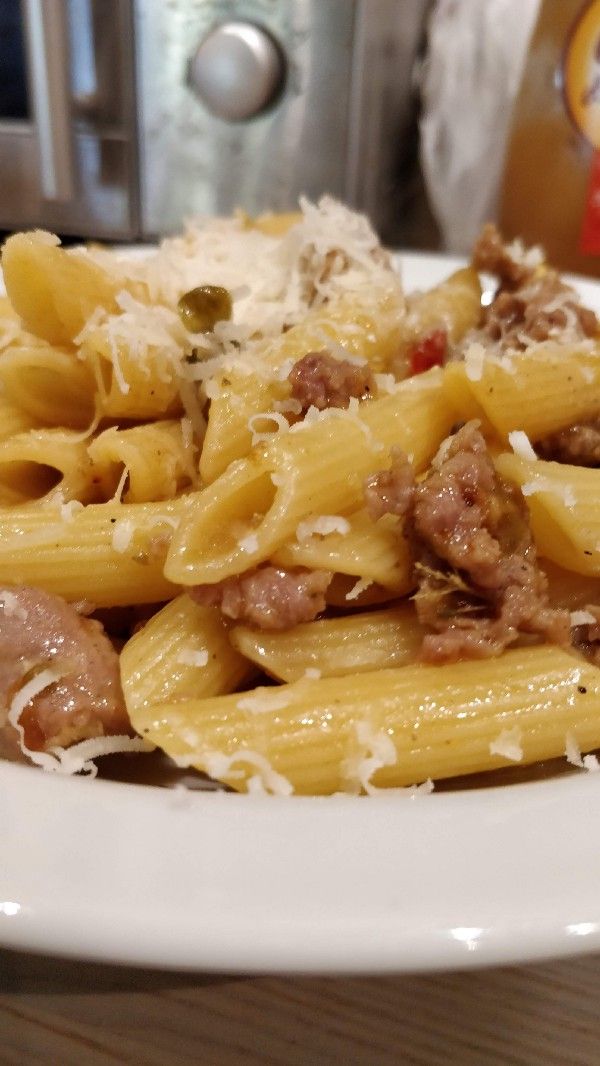 Work continues on the concrete path and although the progress is slow it’s extremely rewarding to watch our garden growing. It’s become a form of local entertainment that anyone who crosses the bridge comments on and offers up a minute or two’s worth of much needed conversation.

Having reflected on how to use what remains of the sausage at lunch time I decided on a pasta dish we haven’t had in a long while. I’ve spent decades ripping pages out of newspapers and magazines so the house is full of plastic folders where clippings have been carefully divided into their sections. In the kitchen I browse through my Mains folder until I find the recipe I’m looking for. (I don’t normally cook from a recipe but there were a few elements I’m not sure I remember; this second completion of the dish is what it will take to commit it to memory.)

It’s typically made with orecchiette but not only are we running low on that, Bear puts in a request for penne, which is fine by me. An onion is softened without gaining colour before garlic, chilli and ground fennel seeds are added to the pan. Next comes the sausage meat, until it’s browned all over. A splash of wine is added (but as I gave up wine for Lent, I add a dash of gin instead– — forgive me) before adding chicken stock. The heat is reduced and the dish simmers gently for approximately half an hour. Meanwhile the penne is cooked. When most of the liquid has been absorbed from the pork, it’s turned off, and at this point I add some capers and the zest of a lemon. (The recipe also calls for 60 ml of whole milk at this stage, but we’re both lactose intolerant and I can’t imagine what that would add to the meal as it’s perfectly delicious without it.) The penne is added to the sauce along with two ladlefuls of the pasta water. I serve topped with a generous topping of grated parmesan.

After the meal, I recline in the hammock we’ve set up in the garden and catch up with a friend in the US. She’s dealing with her grief as her grandmother passed away in Jamaica and due to the lockdown they’re unable to attend her funeral. These are the realities of the virus as the rest of us bemoan the lack of pasta shapes we like but can’t find at the supermarket or while away afternoons watching how to make a mask videos... It’s heartbreaking to witness her pain and to be utterly powerless in terms of helping.

Our thoughts inevitably turn from grief to politics. It’s hard in these times not to comment on the failed response of major nations as the death toll skyrockets in the US and the UK watches in terror to see whether the declining NHS collapses with this additional pressure.

Half an hour into our catch-up I see Bear approaching with the wood sack. As I’m vaguely questioning why he needs to import wood to the garden, I see Riley’s head emerge from the sack and catch the fetching fire engine red of her harness. We’ve been slowly acclimatising her to it and she’s more than happy to wear it for fashion shows indoors, but the garden test proves too much, and as soon as she realises she’s outside — she Usain Bolts for the house.

A frantic twenty minute search later, I’m convinced that she can only be behind the fridge in her original hiding place. My pleas to her fall on deaf ears, so I opt for a spoonful of wet food and Riley emerges, without the aforementioned harness, to accept our apologies.

Bear isolates himself outside in the garden and will probably stay there for the foreseeable future for fear of what supposed wrath awaits him from the two females in his life.