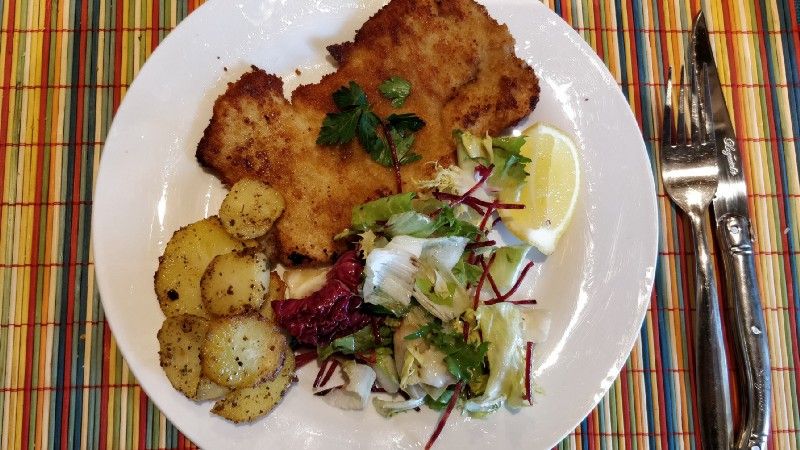 The day starts out at the pharmacy where new rules are in place and only one person is allowed in per family. I wait in a newly lined box until I’m called up to renew my prescription.

There’s something about the precaution of some civilians that is jarring; the hostility of their masks, goggles, and their hyper-vigilance about giving you a wide berth almost as though you have something… It borders on rudeness in a place where there’s normally an exchange of smiles and verbal ‘hellos’.

I truly hope this new rudeness is only temporary.

I’m more clued up about the rules now, which aren’t as severe as I at first believed. Nevertheless my brain is still thinking up ways to circumvent the very serious and necessary system. In addition to accidentally bumping into friends at preordained supermarkets in the style of Muriel’s father Bill along with his mistress Deidre in the film Muriel’s Wedding, I’ve also been considering leaving love notes behind boxes of Barilla or underneath ratatouille tins in random shops… I figure somebody else ‘out there’ might appreciate the sentiment of fellow strangers.

On the way back from the pharmacy, we take a long circuitous drive back home to assuage the car sickness resulting from being grounded for so many days.

The countryside is in full bloom; apple trees with their white blossoms, whole fields encrusted with their covering of yellow daisies. Chickens and roosters run freely in the street in front of us as the spring sunshine glints off our windscreen. Hard to believe we’re under any constraints at all. We try to call our dear friend EV so that we can deliver a perfectly timed wave past his window as we drive by, like touring Royals, but this fails miserably as he’s in full downward dog position and only responds to our missed calls an hour after we arrive back home.

It hasn’t been all isolation hell though; living by the bridge has its advantages as we witness many crossings from the living room window and if we’re in the garden. These days, people throw greetings over the bridge wall the way US newspaper boys toss papers in every Hollywood film, or the way Individual One disseminated kitchen rolls on Puerto Rico after their hurricane… Barriers block our ability to truly connect with one another in a way that leaves us all poorer. No one lingers in quite way they did prior to social distancing, but they do say hello while exchanging a knowing look about the absurdness of the situation, which is nice.

We attempt the paving stone path in the garden but give up halfway as our combined age of almost a century catches up with us. Some of these stones weigh tonnes, and I wish I hadn’t come up with the bright spark idea in the first place and just let Bear win when he suggested we create a pebble path instead. I wanted to try and preserve the things that were originally in the garden but the truth is, if I still had access to Jean Pierre’s digger I’d have slung all of these paving stones into the river under the cover of nightfall.

We quit work early, and I strap a hot water bottle to my back with a blanket (like many an African mother before me has done with a baby), as I prepare to bang out my words for the day.

Bear has proclaimed today as the day for turkey schnitzel. He gets very excited about it and it’s hard to understand why. I know he adores bread, but breadcrumbs over meat don’t elevate either the meat or the bread, in my humble opinion, so I don’t truly comprehend where the merriment comes from. It must be a comfort from his childhood, and now that I think about it, my brother and I did use to get a little excited by a Bernard Matthews Turkey Escalope before we both discovered how to really cook cook…

We started to cook quite early in our household, taking it in regular turns to prepare the family meal. Even in present day, my brother is the master chef in his home in New York, preparing food daily for his two children that have no idea how lucky they are in comparison to our childhood. I think I’d hit double digits before I was allowed a part of the chicken that wasn’t its wing or neck. Wait. How did you know I was the youngest?

Schnitzel is served with a green leaf/beetroot salad and potatoes we accidentally shoplifted from the supermarket. Bear had put them in my basket which had been carrying supplies for the garden, despite me trying to instil clear food and garden paraphernalia separation policy. I’d bought a few large bags of wood chips and declared them proudly to the woman who had scanned the bags and sent me on my way. But unbeknownst to herself and I, I’d been toting Bears pre-cut potatoes that I only discovered at the car loading stage.

Bear had refused to accompany me back into the supermarket to report the theft… His raised eyebrows suggested that if their return was problematic, he’d happily disown me and drive home with our shopping — and without me who’d, of course, be forced to spend the full lockdown in jail — so I chickened out and put them into our boot with the rest of our shopping. I still don’t understand why I have the guilt as they were his potatoes, and I mean that in the clearest way as I rarely eat potatoes (because they don’t agree with me).

Having said all that, I eat them alongside him and my guilt melts away as easily as the light disks of potatoes slathered in butter and black pepper on my tongue. As sins go, it was a small one, I figure, recalling the chickens we saw on our morning drive. I could have licked my lips like a Cartoon Wolf. But I’d let them go unharmed.

So I reckon the good in me is still outweighing the bad.